What to Choose: React or React Native?

Statistical data shows that 230 billion apps were downloaded in 2021 against 218 billion in 2020 and 204 billion in 2019. The number is increasing constantly every year. So, it is clear that all businesses need an app if they want to thrive in this competitive world. There are too many technologies available for mobile app development. The most popular among them is React and React Native. What to choose – React Native mobile app development or React JS? Is this your question? There are many people like you asking the same question. Let’s find the answer to the question.

React is an open-source front-end JavaScript library used to create user interfaces. It allows you to build single-page applications. It was created by Facebook, now renamed Meta. React is very efficient and effective and gives the developers plenty of options to create an impressive UI. It is used by Instagram and Whatsapp.

What is React Native?

It is a framework based on JavaScript to develop Android and iOS apps. It was developed by Facebook during one of its hackathon sessions as its internal project. Today, it is used by many popular organizations like Skype, Airbnb, Pinterest, and Bloomberg. It is used extensively and preferred by startups because of its fast performance, easy development, excellent community support, ease of use, and many more reasons.

How do React and React Native work?

How does React work?

● React works with virtual DOM. Do you want to know what it is?

The HTML code constructs DOM or Document Object Model and developers use JavaScript to work with the DOM. Changing the DOM is expensive but as React works with virtual DOM it saves money and time. Changing virtual DOM is easier and cheaper than changing real DOM because it does not trigger repaint and layout. It just updates the changes made and not the whole content.

● To render the components to the browser, React DOM creates nodes and appends them to the DOM.

How does React Native work?

● It builds apps consisting of native and JS code by making a bridge between the app and the target platform.
● React Native supports the React Library when JS is running along with a native code and then transfers components order to the mobile device view.
● It also works by translating native events into React components.

Which Should You Learn: ReactJS or React Native?

Both React and React Native was developed by Facebook and share a lot in common but there are many differences between them.

● The main difference is React JS is for web development and React Native is for mobile app development.

● Next, React is high-performing and responsive but it is not a cross-platform framework whereas React Native is compatible with all platforms.

● Moreover, React is just a library but React Native is a framework as well.

Which should you learn?

Both React and React Native is based on JavaScript. So, having knowledge of JS is important before learning them.

So, if you want to develop a mobile app, you should learn React Native but you should remember that you should know JavaScript first. 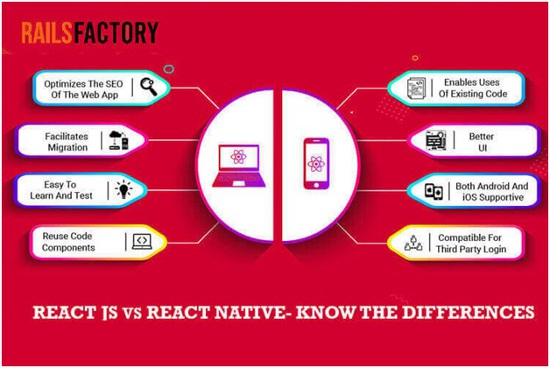 Importance Of SEO in Digital Marketing. Must Read

Importance Of SEO in Digital Marketing. Must Read

Moving Soon? Here is Why Should You Hire Professional Movers