Node.js vs. Java: Which is better? Why would you prefer to utilize Node.js over Java, or vice versa? Do you frequently ask yourself these questions? Because it creates quick, cross-platform, and scalable solutions, Node.js is unquestionably one of the most popular platforms. In the year 2022, it will continue to symbolize the competition by encouraging startups worldwide to choose it over a variety of other technologies. That is why, even though Node.js was first released in 2009, it is still one of the most popular programming languages. 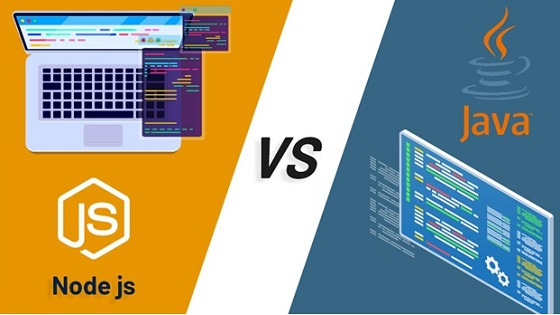 It is also worth noting that Java plays an important part in today’s programming field. Its key tagline, “write once, run anywhere,” may have anything to do with it. To put it another way, the fact that this language is platform-agnostic is the main reason for its popularity among developers and programmers. For many operating system servers, Java can be used to create end-to-end desktop and mobile applications.

So, in the year 2022, which technology is superior? The below-mentioned aspects can help determine which is suitable for your project.

Ryan Dahl combined C, C++, and JavaScript in Node.js, which was released in 2009. It is a cross-platform, backend JavaScript runtime environment with the primary goal of running JavaScript code outside of a browser. Node.js not only connects to external libraries that are developed in other programming languages but also interfaces with I/O devices via APIs. The Node.js paradigm “JavaScript everywhere” emphasizes integrating web app development around a single code base for the server-side script and the client-side script.

In 1995, James Gosling came up with Java which is known as a general-purpose, class-based object-oriented language. It is a network-centric language which has a few implementation requirements, and it is proven by its own paradigm, “Write once, execute anywhere.” This programming language is designed to be flexible and portable, allowing it to operate on any machine or operating system. When the initial version of Java was published, it was intended to develop interactive television, and it quickly became one of the most widely used programming languages on the planet.

Stability, performance, documentation, security, community, talent pool, speed, ease of learning, and development cost are all essential aspects to consider when comparing Node.js with Java to evaluate which use-cases one is better than the other.

Since Node.js is built on JavaScript, programmers can use the same syntax on both the client and server sides, allowing for a much faster and more agile process. This environment also includes an event looping system, which allows servers to reply in a non-blocking manner while also allowing for increased scalability. The reason for developers to prioritize Node.js is due to its lightweight aspect.

Java is a statically typed and secure language, unlike its competitor Node.js. Multithreading (or concurrency) and platform independence are two significant advantages. Multithreading enables the execution of numerous processes at the same time while also distributing CPU usage appropriately. Java is compiled in bytecode, which aids portability and platform independence by allowing the code to run on any machine or operating system without requiring any changes to the syntax. Java’s memory management and concurrent accumulators are two more noteworthy aspects.

Since Java is written in byte codes, it performs better and faster than other programming languages. To provide efficient operations, the virtual machines comprehend byte-code instructions. Java has also added a just-in-time compiler to provide applications with high-performance features.

For handling multiple concurrent requests at a fast rate, Node.js has a single-threaded event loop type of architecture. Furthermore, NodeJs’ asynchronous architecture allows for the use of the MVP/MVC architecture pattern, which reduces onboarding and isolation difficulties in the app codebase.

This feature allows Node.js to help clients reduce their time-to-market and compete more effectively. Aside from that, NodeJS’ application architecture allows it to handle several concurrent requests while maintaining great performance.

When developing applications in Java, programmers choose the model-view-controller design. The design pattern is comparable to the internal architecture of the backend technology because the model shows objects in Java.

Java makes code maintenance and application testing a breeze. Individual roles can be assigned by the development teams. In large apps, they can work on different functionalities. As a result, a modification in one module may have no impact on the other modules or the application as a whole. This procedure aids team productivity while also reducing total time-to-market.

Node.js is a programming language that may be used to create apps that are extremely scalable. For handling multiple concurrent requests, non-blocking input and output systems, as well as event-oriented models, are used. Furthermore, Node.js’ event-loop design enables the server to handle a large number of requests at once. NodeJS claims scalability and efficiency since numerous types of services are deployed to discriminate between the various task servers.

Java is very scalable, which enables it to deliver excellent performance in the creation of enterprise applications. However, proper practices for adding more processing resources such as RAM and CPUs must be followed. Java provides vertical and horizontal scaling, as well as a single point of failure and a single solution for each architecture requirement.

The broad ecosystem of NodeJS allows for competent testing and debugging. Jasmine, AVA, Mocha, Lab and Code, and Jest are just a few of the automated software and frameworks that assist in providing a friendly testing environment for apps. Furthermore, developers can use testing libraries such as Jest, Chai, and Mocha to provide a smooth and error-free experience for users.

Java can be used by developers to create test scenarios. As a result, customizable tests can be written using data-driven sequencing and grouping features. Java also makes it simple to construct parallel testing. Apache, FitNess, Selenium, JMeter, and JUnit are just a few of the many testing frameworks and tools that Java supports. Java, in turn, ensures that popular IDEs are compatible and supported.

Due to its effectiveness in handling multiple concurrent requests, NodeJS is considered perfect for constructing scalable apps. NodeJS is highly compatible with code and service modules since it can handle smaller modules.

Due to Java frameworks like Annotation Syntax and Spring Boot, developers find Java to be compatible with the microservice design. It allows for easy microservice development and the capacity to read even the most complicated systems. For standalone apps and microservice modules, Java provides model components and improved connections to backend resources.

All NoSQL and relational databases are supported by NodeJS. However, a NoSQL database, such as MongoDB, is required because it allows data to be stored in JSON objects. For Javascript-oriented backends like NodeJS, this improves accessibility. NodeJS and MongoDB are both supported by the object data-modelling library. Node.js also boosts productivity by increasing code readability and managing code flexibility.

For data access in applications, Java uses Java Database Connectivity, which is standard database connectivity. SQLite, MySQL, and PostgreSQL are just a few of the most used databases. Developers and programmers use built-in Java databases to build simple projects. JDBC-enabled databases can also solve the challenges that relational databases have.

Java and Node.js are two distinct technologies, each with its own set of pros and drawbacks. It is critical to comprehend them to assess your future project properly. Benchmarks of Java vs. Node.js reveal that the latter performs better in general due to its absence of buffering and unique code implementation. With Java’s lack of built-in scalability features, Node also wins in terms of scalability. Hire Node.js developers if your project needs more scalability.

The APIs in Node.js keep changing, whereas Java APIs are more steady. Since vulnerabilities follow a similar pattern, Java can be a star here as its design is aimed toward increased security.

Ecommerce SEO Tips to Generate Organic Traffic to Your Store