As soon as you’ve built a website, it begins paying for itself. It’ll return whatever you’ve invested faster if it has a great design, too. That’s why tools can be so useful. By using them, it’s not hard to make a well-designed site. Here are a few of the best out there. 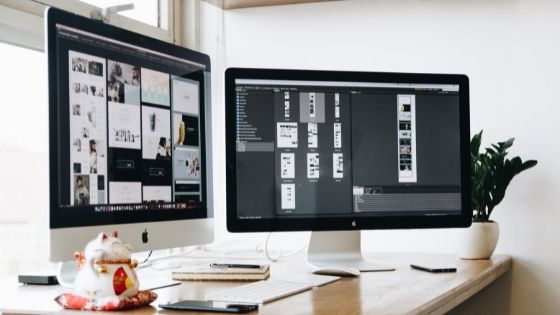 If you’ve been on the internet for a while, you’ve stumbled across a WordPress website at some point. In fact, they’ve been what designers have used to make up to 30% of the internet. Since their program makes it so easy, anyone can learn how to use it.

Plus, they’ve partnered with tons of hosting platforms. You can use their platform to make the website and hose it on one of them. So, finding everything you need to make a website isn’t hard if you’re using WordPress. It has everything you need, all in one application.

Now, this isn’t a web design app, but it’s still incredibly useful. When you’re designing a website, its content is what search engines use to rank them. So, if it has easily readable content, it’ll usually perform better.

Using this app is pretty straightforward, too. When something in your text doesn’t make sense, it’ll be highlighted. So, you can look at anything to see if it’s standing out against the rest of the white text. Most of the time, you’ll only have to correct a few things, making your content much better.

Also, if there have been a bunch of passive verbs placed throughout the content, you can see them easily. They’ve highlighted them in green, so it’s not hard to see.

Is Builderall worth it? That’s been wondered by many as they’re searching for an all-purpose tool. But, the verdict is in, and it’s clear-cut. Since they’ve packaged so much into one app, it’s hard to compare with what’s on the market. You would have to use several tools to match the functionality packed into this.

Once it’s loaded, there is a dashboard displaying options in front of you. By clicking on the design tools, a screen loads up where they’ve put tools to customize your styles. Then, once you’re done customizing them, it’s time to optimize their SEO. That’s going to make them rank better if someone has searched for something online.

Plus, their CRM features have changed how you relate to customers. Once someone has done business with you, their information is logged by the app. You can go through everything whenever you’d like to see if there’s a potential sale.

Squarespace doesn’t have the wide-ranging functionality of the other apps on this list. But, it’s still a functional tool used by many beginning web designers. They’ve put everything into a user-friendly tool. Plus, you can even use their platform to launch an e-commerce store if that’s what you’re after.

A ton of major brands have built stuff using this platform, too. So, it’s not only used by people designing as a hobby. If you’re not great at creating designs, you can pick out one of their premium ones. They’ve made them look good enough to blend in with something professional, held side by side.

You have a ton of features underneath the hood if there’s enough time for you to look including Squarespace plugins in order to add functionality to your site. For example, there’s a way to track how much traffic the site has received. Then, you can analyze where it’s been coming from.

This is a great tool if you’re into design. You can use it to customize a theme for your website. Plus, they’ve uploaded tons of material you can buy if you don’t want to make something yourself. Then, once you’ve found an interesting theme, porting it to another platform isn’t hard.

Building a house is a lot like building a website. For a lot of people, the exterior is what matters most. But, you really have to consider what’s inside if you’re making a judgment of quality. So, it’s important to use tools while building them to make sure they’re well-made. Otherwise, you could waste tons of time building something you’ll hardly use.

How Heat & Humidity Can Impact Your Homes Roof